EU election observation mission to Bosnia and Herzegovina in 1998 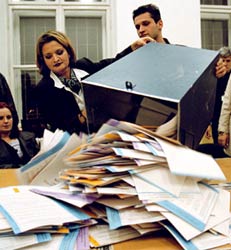 At the invitation of the Government of Bosnia and Herzegovina, the European Union established a mission to observe the parliamentary elections there on 12 and 13 September 1998.

The European Union observed the parliamentary elections held on 12 and 13 September 1998, the second post-war general election. The vote took place almost two years to the day after the first polls and nearly three years after the signing of the Dayton Peace Agreement (DPA).