EU Heads of Mission in Somalia issue the following statement

Mogadishu, 19/09/2016 - Today the Somalia Ministry of Education signed a Cooperation Framework and Memorandum of Understanding with 3 Federal Ministries of Education from Jubaland, Galmudug and Southwest Administration to facilitate smooth management of education and provide a collaboration platform between the National and Federal levels of government. The exercise was supported by the EU and facilitated by ADRA,

Today's blast in Mogadishu is yet another attempt to disrupt Somalia's process towards democracy and state-building, following decades of unrest and civil war. We extend our condolences to the families of the victims. 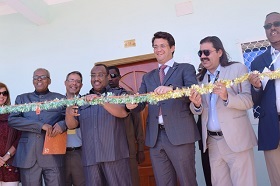 GAROWE, February 15, 2016 -  The European Union jointly with the Government of Puntland launched the second phase of the Puntland Education Sector Support Programme. The Waxbarashadu Waa Iftiin (Education is Light) phase II programme launched today is implemented by a consortium of NGOs comprising CARE, Save the Children, ADRA and VU Amsterdam University, and in close coordination with the Ministry of Education, Puntland. Read more 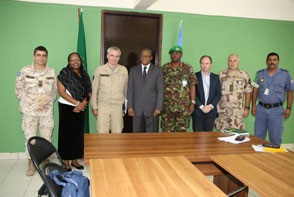 Mogadishu, September 11, 2015 – Lieutenant  General Wolfgang WOSOLSOBE, the Director General of the European Union Military Staff was hosted by the EU in Somalia and witnessed firsthand the work of the European Union Training Mission Somalia (EUTM Somalia) and interacted with Somali authorities, AMISOM, UN representatives, EUCAP NESTOR and other EU partners active in the security sector.During his visit on 6 and 7 September, 2015, Lt. Gen WOSOLSOBE discussed the overall security and political context and the EU's comprehensive engagement with Somalia. For more:

Top News from the European Union

Working towards stability and rule of law in Somalia

EU hands over of the Sheikh Technical Veterinary school to IGAD