Work with the Holy See

Vatican City and the Holy See

The Vatican City (Stato della Città del Vaticano) is an independent sovereign state officially known as the State of the Vatican City. It is located within the city of Rome and is the smallest independent state in the world (around 44 hectares). This special territory was created after the signing of the Lateran Treaty on 11th February 1929, between Italy and the Holy See. The signing of the agreements took place in the Lateran Palace on the Caelian Hill of Rome (Lateran Pacts). It is not a Member of the European Union.

Today, this territory is delimitated by walls and situated within the city of Rome itself. It is headed by the Bishop of Rome, Pope Francis who is assisted by high level clergymen of the Catholic Church. Around 800 people live in the Vatican City.

It should not be confused with the Holy See (Santa Sede or Sede Apostolica), which existed long before the foundation of the state of Vatican City. The Catholic Church carries out its mission with the help of the various churches located around the world and with the work of its central government, which is headed by the Pope.

The Vatican has its own channel on Youtube that offers news coverage of the main activities of the Holy Father and of relevant Vatican events.

Work with the Holy See

The first Head of the EU Delegation in Rome, Mr Luis Ritto, was accredited to the Holy See on 24 June 2006, following approval by the EU Member States on 4 April 2006. The visit by President of the European Commission, José Manuel Barroso, to Pope Benedict XVI on 5 May 2006 opened the way for this accreditation, and showed the interest and commitment of the EC President to establish full diplomatic relations between the European Union and the Holy See. With this accreditation, the European Union brought the relations to an appropriate footing of reciprocity, the Holy See having already established diplomatic relations with the EU in 1970 and having detached a Diplomatic Nuncio ever since. On 6 February 2012, Ambassador Laurence Argimon-Pistre presented her Credentials to Pope Benedict XVI as new Head of the European Union Delegation to the Holy See. Ambassador Argimon-Pistre has already met in several occasions with Pope Francis. 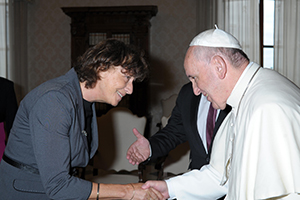 Ambassador Argimon-Pistre with Pope Fransis in the occasion of Mr. Schulz, President of the European Parliament, official visit on 11 October 2013

The Vatican’s customs rules are based on a 1930 agreement with Italy which exempts the Vatican from all Community duties and taxes. The small amount of goods originating in the Vatican and exported to Italy is exempt from duty and subject to a preferential arrangement.

In view of the introduction of the Euro, the EU Council of Ministers authorized Italy

to negotiate a new Monetary Agreement

. On special occasions (anniversaries, vacancies of the papal throne, ecumenical councils), the Vatican City may mint up to an additional €300.000 per year. It may also continue to issue collectable coins of which the total amount must still be within the above ceilings, however.

The activities of the EU Delegation in Rome with the Vatican are dealt with by the Head of Delegation who attends ceremonies and events organised by the Vatican. The Head of Delegation also chairs the coordination with the Member States accredited to the Holy See. The relations have focused on issues such as the inter-religious dialogue, the international political situation (e.g. tensions in Central African Republic and South Sudan, the refugee crisis in Syria, the Israeli-Palestinian conflict, environmental issues, poverty and hunger, etc) and some specific EU internal debates (Christian roots of Europe, family values, etc). 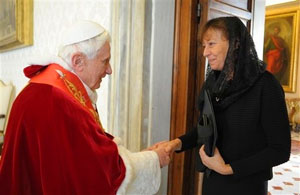 This growing manifestation of interest for Vatican matters is opening the way for the development of a more structured political dialogue with the Holy See.