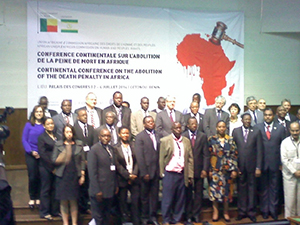 Following recommendations of the EU- Africa Human Rights Dialogue; the first continental conference on death penalty was held in Benin with the support of the European Union. Organised by the African Commission on Human and Peoples' Rights in collaboration with the Government of Benin, the conference held in Cotonou from 2 to 4 July 2014 gathered representatives from African Union (AU) Member States, parliamentarians, national human rights institutions, civil society organisations. 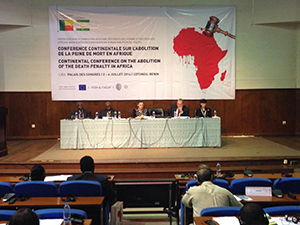 The conference has permitted participants to debate the issue of the death penalty in Africa as well as on the need for the adoption of a regional legal instrument on its abolition.

The main objectives of the conference were (i) to finalize the draft protocol; (ii) to issue a Declaration for African Union Member States to support the adoption of the draft Protocol and of UN Resolution; (iii) and to launch an advocacy and awareness campaign.