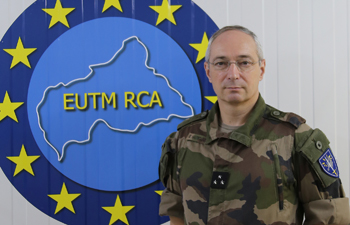 On 14 March 2016, the Council approved the Crisis Management Concept on a possible EU Military Training Mission in the Central African Republic (EUTM RCA), to contribute to the country's defence sector reform. In a letter dated 30 March 2016, the President of the CAR, Faustin-Archange Touadera invited the Union to deploy a EU CSDP military training mission in the CAR (EUTM RCA). Subsequently, on 19 April 2016 the Council formally decided to establish EUTM RCA with a view to launching it in July 2016.

In close coordination and complementarity with the MINUSCA, EUTM RCA will support the CAR Government in the implementation of the Security Sector Reform by assisting the Forces Armées Centrafricaines (FACA). The goal is to support the build-up of a modernised, effective, ethnically balanced and democratically accountable FACA. The Mission shall concentrate its action in the Bangui area.

EUTM RCA is part of the EU’s comprehensive approach to the situation in the CAR. This approach aims to contribute to the African and wider international efforts to restore stability and support the political transition process in the country.

The new mission follow the EU Military Advisory Mission in the CAR (EUMAM RCA), the mandate of which came to its end on 17 July 2016.

General Hauteclocque-Raysz (FR), has been appointed as Head of Mission.