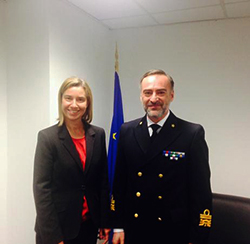 EUNAVFOR MED operation Sophia is but one element of a broader EU comprehensive response to the migration issue, which seeks to address not only its physical component, but also its root causes as well including conflict, poverty, climate change and persecution.

The mission core mandate is to undertake systematic efforts to identify, capture and dispose of vessels and enabling assets used or suspected of being used by migrant smugglers or traffickers, in order to contribute to wider EU efforts to disrupt the business model of human smuggling and trafficking networks in the Southern Central Mediterranean and prevent the further loss of life at sea.

Since 7 October 2015, as agreed by the EU Ambassadors within the Security Committee on 28 September, the operation moved to phase 2 International Waters, which entails boarding, search, seizure and diversion, on the high seas, of vessels suspected of being used for human smuggling or trafficking.

and his Deputy is Rear Admiral (Lower Half) Réné-Jean CRIGNOLA 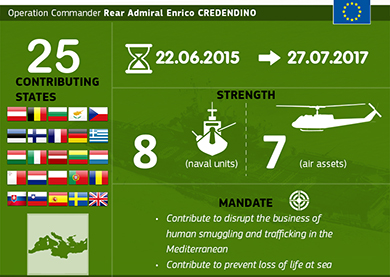 RAI TG 1 on board of ITS Cavour